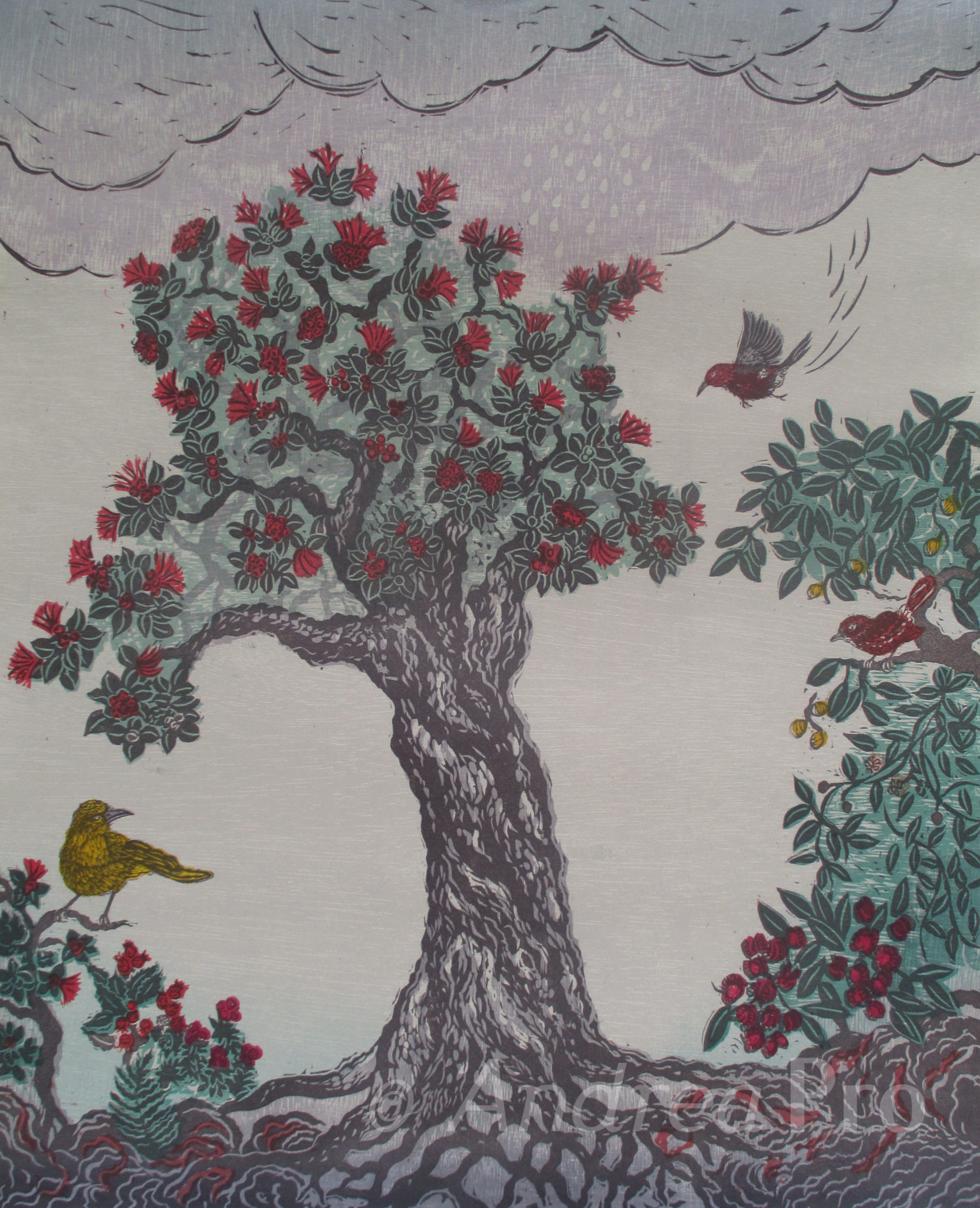 The island of Hawai’i is influenced by the ‘Ohi’a, its most abundant tree, as much as any other force of nature. ‘Ohi’a is the first form of life to inhabit the new land created by lava flows and attracts other species one-by-one. Birds drop seeds that sprout into flowering and fruiting plants that attract pollinating insects and through their cycle of life, death and decomposition create the forest ecosystem that becomes inhabited by hapu’u and other ferns along with canopy trees like koa, iliahi (sandalwood) and lama. Forests attract clouds and the rains come to nourish the land and its people.

For the first time ever the abundant ‘Ohi’a faces a serious threat to its survival. Since 2010 ‘Ohi’a have been dying from a fungus that now affects many thousands of acres. Scientists have noticed that within stands of dead trees some remain healthy. They don’t yet understand why some die and others survive.

‘Ohi’a means “to gather.” ‘Ohi’a gathers gems of nature, assembling the verdant forest that attracts rain. How will that happen now? Could we end up with thousands of acres of brushy invasive species instead of the diverse canopied forests that grace our island? ‘Ohi’a is central to Hawaiian culture, influencing people’s very sense of identity and is fundamental in cultural practices including hula.

“Laka Gathers the Forest” is an expression of mourning, acceptance and hope as we face the changes that are coming with the death of so many ‘Ohi’a. Laka is the Hawaiian goddess of hula, associated with reproductive energy and regenerating the forest. Her physical embodiment, or kinolau, is in the form of the ‘a’ali’i shrub, maile vine and lama tree. These plants are on the right side of the image under the elepaio bird. At left is the forest regenerating as it has for generations- the sturdy little ‘Ohi’a attracting the first bird, an amakihi, followed by pukiawe, ama’u and ohelo. The way the forest gathers and grows will likely change as this significant development in the evolution of the island unfolds. I wonder what Laka and the forces of nature will create, and how we humans can use this situation to practice a more harmonious relationship with nature. Printed on Rives French paper with deckle edges.